Atmosphere to rival Limbo, Artstyle to rival Wind Waker and a soundtrack to rival Final Fantasy. It’s difficult to describe RiME in only a few words. Luckily, we have a full review to do just that. What exactly is RiME, where does it fit in the known game genres and is RiME worth your time and money.

Not only is it hard to describe RiME, it’s also difficult to compare to other games. If anything, RiME probably comes closest to a less depressing three-dimensional version of Limbo. There is little story to start you off. You can jump, roll and yell. That’s it. You don’t learn any new moves and you don’t grow more powerful as you go. All you know is that you need to get to that tower. And so, your story begins.

And what an enthralling story it is! You wake up on an island with no idea where you are and where to go. After just a short walk you see a looming tower with a keyhole shaped window. No-one told you, and nothing specifically points towards it, but you know; that’s where you need to go to!

In order to reach your destination, you must make your way through RiME’s insanely atmospheric world. To say you have to solve puzzles would be both overselling it and selling it short. Puzzles usually consist of getting a specific object to a specific location. Or to make sure the light shines on the right ornament. Nothing in RiME will make your noggin hurt trying to get a solution. But that is where it’s beauty lies. All puzzles are cleverly designed and implemented into the world. Most of the time you know exactly what to do in order to progress and have little issue executing the strategy. Due to this, you get to experience clever solutions and a brilliant pacing.

Only in the later half of the game, I had a single moment where I did not know where to go. Even though this only lasted about 3 minutes and was because I simply overlooked the obvious path, it killed the momentum hard and made me realise how flawless most of the pacing in RiME really is. 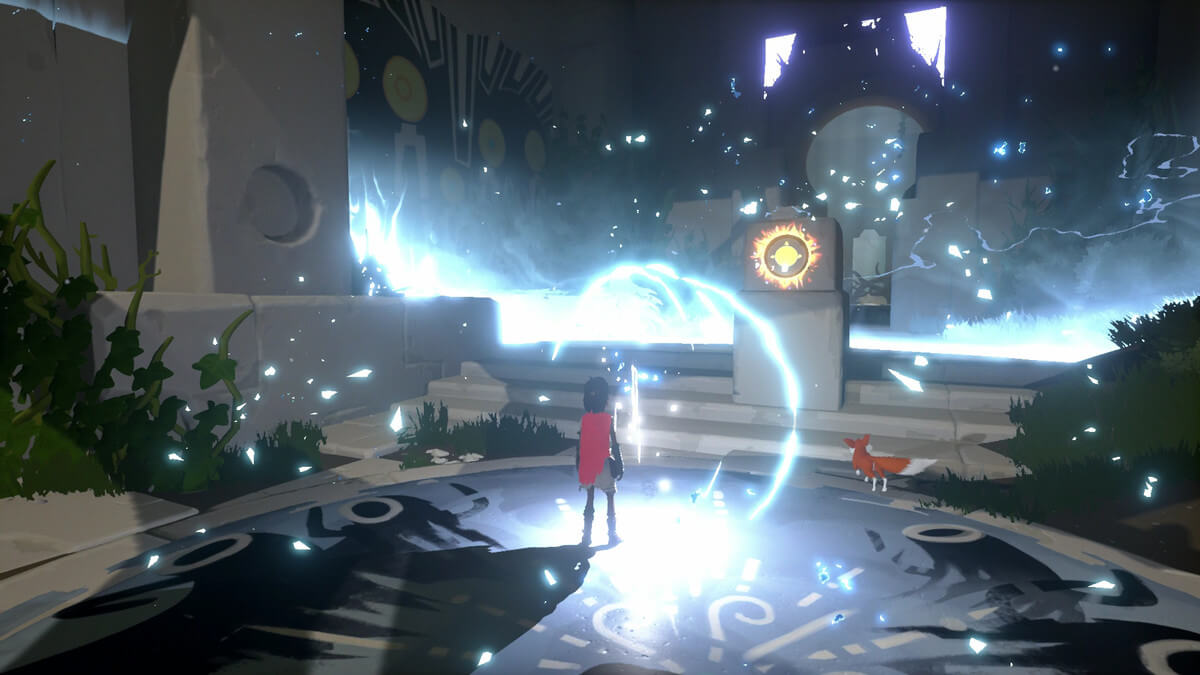 RiME is truly one of the most beautiful and stunning games I have ever played.

RiME is most likely one of the most beautiful games I have ever played. Not only in terms of visuals and style. The world is enthralling, the music simply magical and the atmosphere… stunning. There truly is no other word to describe it. During my 5 hours playthrough, I made a friends, ran from a giant bird and was an essential part in the rebirth of a species. More than once, I was literally struck in awe by what happened.

All this beauty is supported by a possibly even more beautiful dynamic soundtrack. During some of the puzzling walks through tunnels or dark caves, you hear little other than gentle notes guiding your steps. And then, you hit a switch, opening a path and as the camera zooms out to show what happens, the music bellows into a grand orchestral piece. It really is hard to describe for someone with little knowledge about music. However, the way the music supports both atmosphere and gameplay is phenomenal!

After 5 short hours, I was at an emotional ending of RiME. Even though it was just a bit to sudden, it’s a satisfying end to the story told. No sense dragging things out for the sake of play-time, but I wouldn’t have minded one or two more hours of content.

The age old discussion, when is a game worth ‘X’ money. Truth be told, only you as buyer can really decide that. Based on available income, playtime etc. Be that as it may, RiME’s €35,- pricetag seems a bit steep and gives me a hard time to fully recommend it. In the end it really is up to the player to decide if 5 beautiful hours are worth €35,-.

That being said, I doubt I’ll keep my total playtime at 5 hours. RiME has many hidden collectables and even more interesting; hidden places. These hidden places don’t offer anything other than the experience of being there. One of the places I found was a hidden burial place of sorts. But instead of creepy, it was serene, filled with flowers and silence.

Aside from hidden locations and collectables, RiME is well worth a second journey. To some immediately after the end-credits, to others a year later. I know for a fact, that I will be making this beautiful journey again someday!

Credit where credit is due

My hat is off to the people over at
Tequila Works for the game they delivered! With a special mention to the sound design. The soundtrack alone is worth listening to. From the moment you enter the world, to the end that comes all to soon. RiME is stunningly beautiful, enthrallingly captive and heart-warming endearing. RiME isn’t perfect, but doesn’t have to be. I thoroughly enjoyed my time with RiME and if you don’t mind the somewhat steep pricetag, I highly recommend RiME to anyone willing to explore a beautiful and stunning world.