The talented bunch over at Panic Button have sure been working hard. Not satisfied with simply bringing over one of the most technically demanding shooters to the Switch with Doom, they follow this up mere days later with a conversion of one of the most popular multiplayer phenomenons. But how well does it hold up on Nintendo’s diminutive device?

Ball Games in the Car Park

Rocket League is a multiplayer game by Psyonix originally released back in 2015 as a sequel to the bewilderingly-named Supersonic Aerobatic Rocket-Powered Battle-Cars. Best described as Revolt meets football, the game see players split into two teams with the objective of scoring the opponent’s goal net, with the added twist being having to rely on the abilities of your exaggerated automobile. Players can boost to chase the ball, flip to intercept or deflect, or just destroy their opponent entirely if fair play doesn’t yield results. 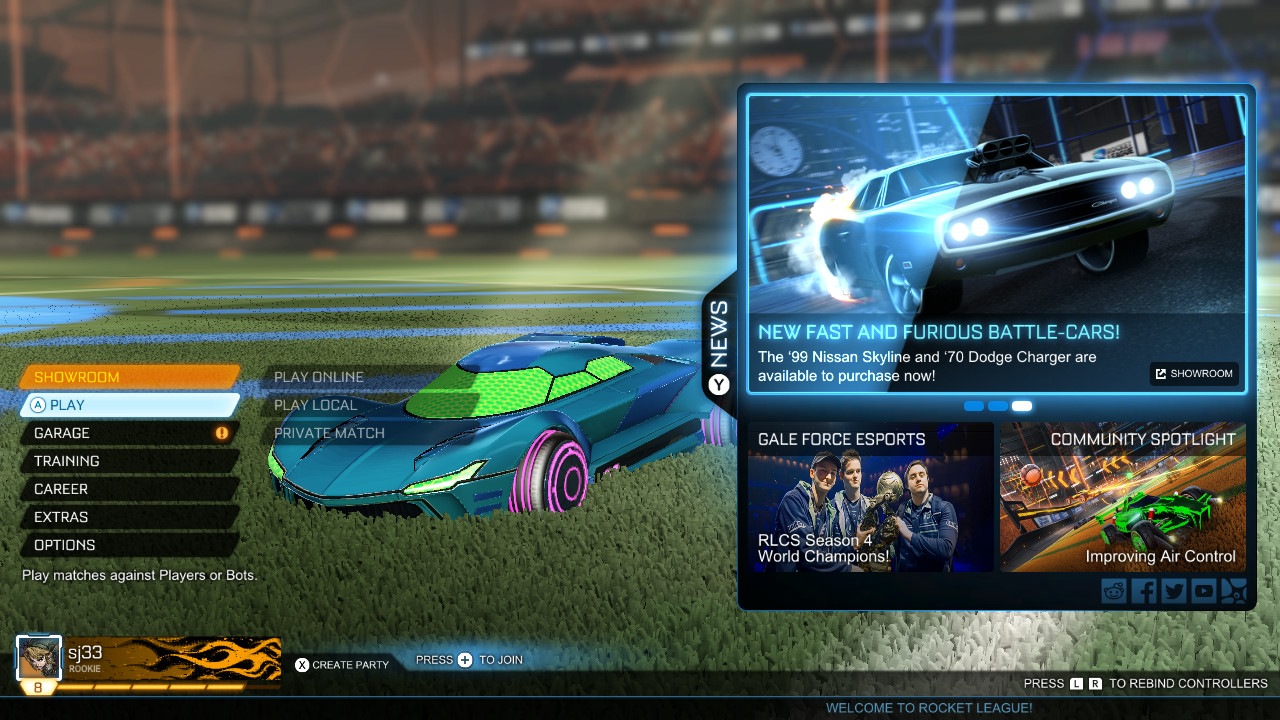 Manoeuvring your vehicle can be frustrating given that cars tend to navigate better using forwards or reverse motions rather than to the side and is perhaps the only time aside from the London rush hour when you feel you might be better getting out and traversing by foot, but everything clicks when you successfully make your first intervention, assist or even score your first goal. Suddenly, it feels almost like a stunt racer with a purpose as your become more aerobatic with your gas guzzler. Ultimately, whether or not a player takes to the game largely relies on their ability to master reversing in addition to breaking, U-turning and creative jumping.

The arenas may remind some players of Bitmap Brothers’ seminal Speedball series, with the rounded walls allowing for both cars and ball to ricochet and providing an easy way to move the ball to the opposition half. 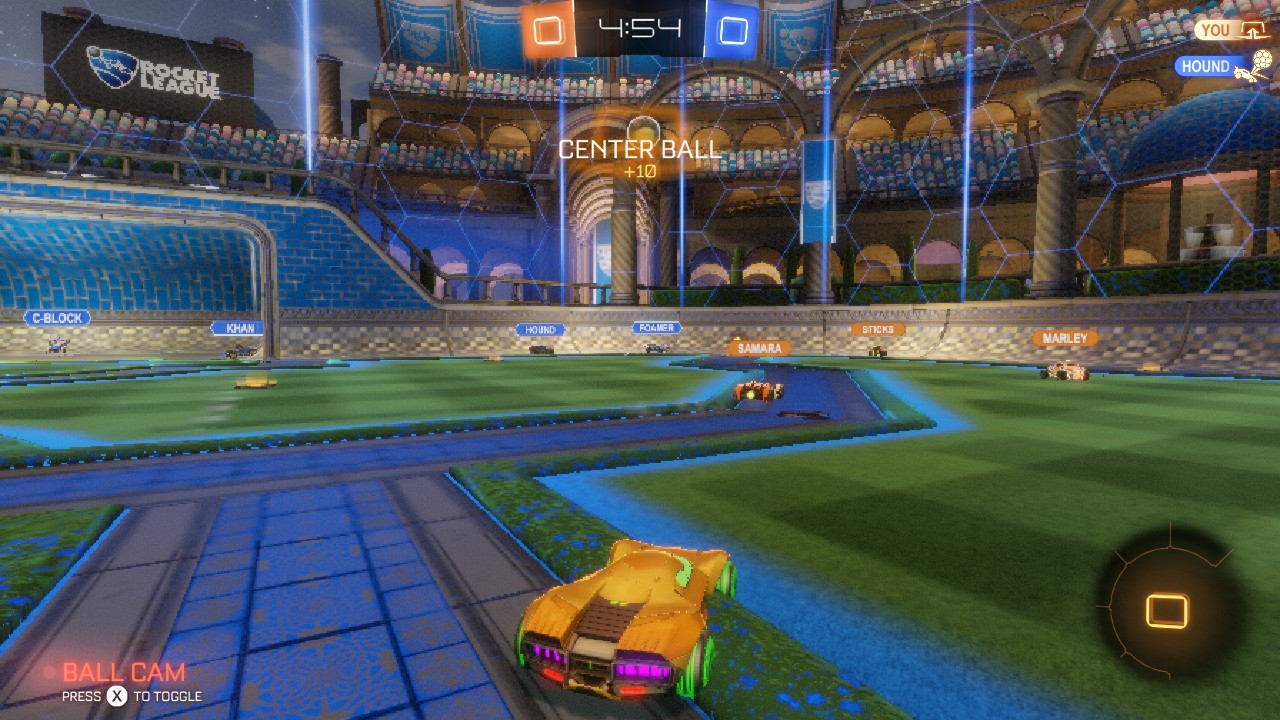 Given the relative age of this game and rather modest technical requirements compared with 2016’s Doom, people would be forgiven for assuming that porting Rocket League would be a more trivial proposition than id Software’s id Tech 6-powered juggernaut. In reality, Rocket League poses its own set of challenges. Rocket League utilises the rather dated Unreal Engine 3 engine first used way back in 2006’s Gears of War. The engine has certainly evolved since this release, but the fact remains that it is an engine designed for the previous generation of consoles. That said, the lack of a native Switch build of this engine has meant that Panic Button have needed to port the entire engine to the new platform. The engine’s successor, Unreal Engine 4, does indeed exist for the Switch and an early build way used to power Sumo Digital’s excellent Snake Pass, but that game demonstrated why Epic’s fourth generation engine would not have been the solution. Snake Pass has to run substantially below the Switch’s native resolution simply to reach its 30fps target – something that it often fails to manage. Panic Button targeted 60fps with this release, and have done an admirable job of maintaining that framerate whilst attempting to keep as close to native resolution as possible by utilising a dynamic resolution.

Other reviews on games you might like:
– DOOM on Nintendo Switch
– The Escapist 2
– The Legend of Zelda, Breath of the Wild

This results in the game sticking to 720p in docked mode while often resolving at around 576p in while on the go depending on until complexity of the arena. While the non-native resolution is generally not a problem, the game seems to use a sub-standard anti-aliasing solution resulting in some pretty messy jaggies at a distance. If one of the big visual complains regarding Doom on the Switch was the aggressive Temporal AA solution making some enemies in that distance look like soup, Rocket League’s approach has the opposite problem. Some other cutbacks has been made in the visual department do exist but make no mistake – this is a game that would likely have featured a 30fps cap on the 360 so hitting twice that framerate is a decent achievement. 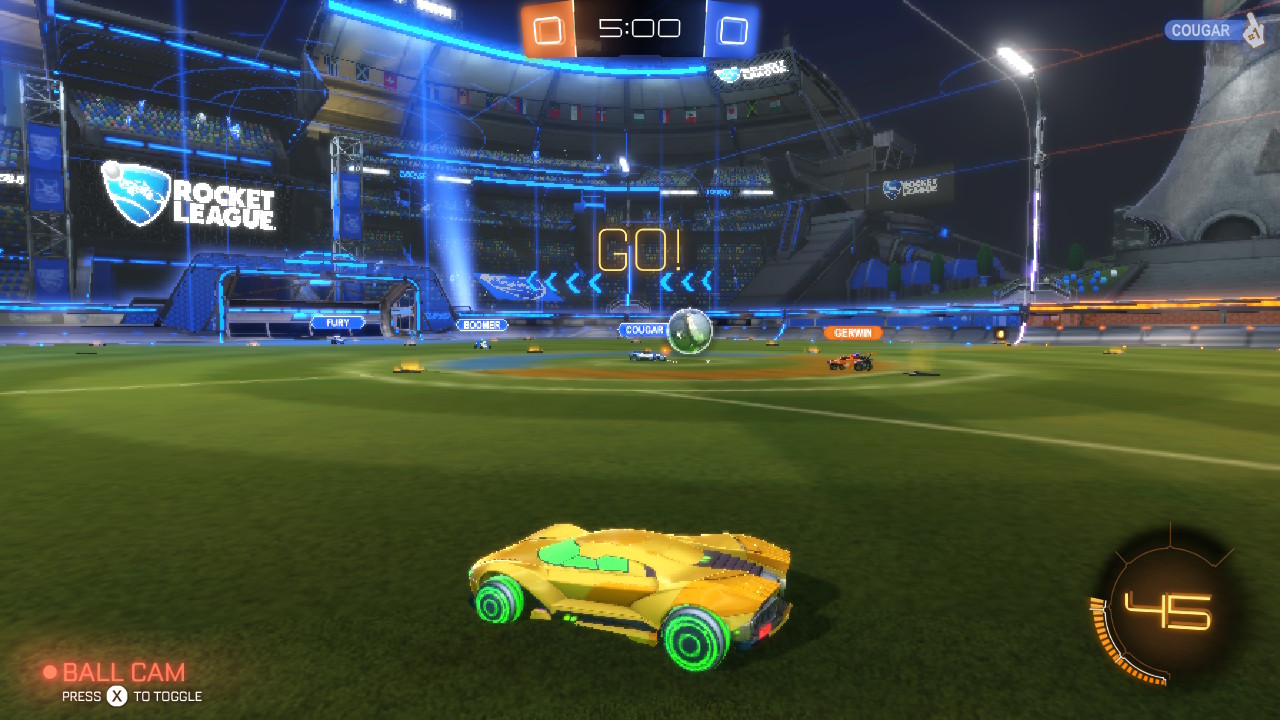 An Eye for Detail

Beyond that, the only real criticism that can be levelled at the port itself if the small font used for the interface. Doom suffers from the same issue and is reminiscent of a similar problem in Capcom’s Dead Rising. This seems to be a stylistic choice in an attempt to match the PC interface and certainly isn’t a problem in portable mode. Such a small font is designed for players sitting close to their PC monitors however, so anybody playing the game in docked mode might need to dig out some glasses. Players should also remember that Rocket League is primarily an online game, which may somewhat limit the scenarios where you can actually play the game in portable mode.

While the game does feature offline season and exhibition modes as well as a whole host of training sessions, these are intended to warm-up players before getting stuck into the game proper. This is no different to Nintendo’s own Splatoon 2, except there’s probably even less of an offline mode to speak of here. With that in mind, it’s not likely that too many people will be playing this in their commute to work unless they have some sort of pocket WiFi. More realistically, this is a game that people will be playing on the couch or in bed, avoiding hogging the TV or being anti-social in the bedroom. Docked mode is an option of course, but as with most multiplatform games on the Switch there are better options on other formats for people who have little use for online play. Local multiplayer of course remains an option for those with friends who wish to partake in some rocket powered madness.

Overall, this is a great version of Rocket League and another triumph for the good folk at Panic Button. The game itself remains somewhat divisive as controlling a car to manoeuvrer an oversized explosive football is only marginally easier to execute within the game than real life. Yet, there is an incredibly addictive quality, and succeeding in spite of the restrictive controls through mastery of manoeuvring your vehicle is hugely rewarding. This is a massive multiplayer game for a reason, but those experiencing the game for the first time may need to persevere. For those who don’t need convincing, what we have here is a conversion of Psyonix’s Classic that runs at 60fps without missing a beat, contains the full feature set as other versions of the game, features cross-platform play with PC and Xbox One, and can be played on the sofa.