The Switch is barely a year old, yet the new kid on the block has already played host to a handful of great RPGs. It’s fair to say that most people weren’t expecting a new Xenoblade game quite so soon. But does Monolith’s latest entry in their flagship Xeno series hold up to the high bar set by its predecessors?

With its immediate successor released on 2015, 2 years is an incredible turnaround by any standard, let alone a sprawling RPG. The explanation for this can be found in the reception met by its predecessor, Xenoblade Chronicles X for the Wii U. Even while the game was under development, Japanese fans were disgruntled by the downplaying of the story in favour of open-world exploration and a focus on missions. This affected the developers to such an extent that initial planning for Xenoblade Chronicles 2 began as far back as 2014. Spurred on by an agreement with Nintendo to get the game out during the first year of the Switch’s life. Being able to utilise the technology established by Xenoblade Chronicles X had allowed actual development of the game to be completed in record time. 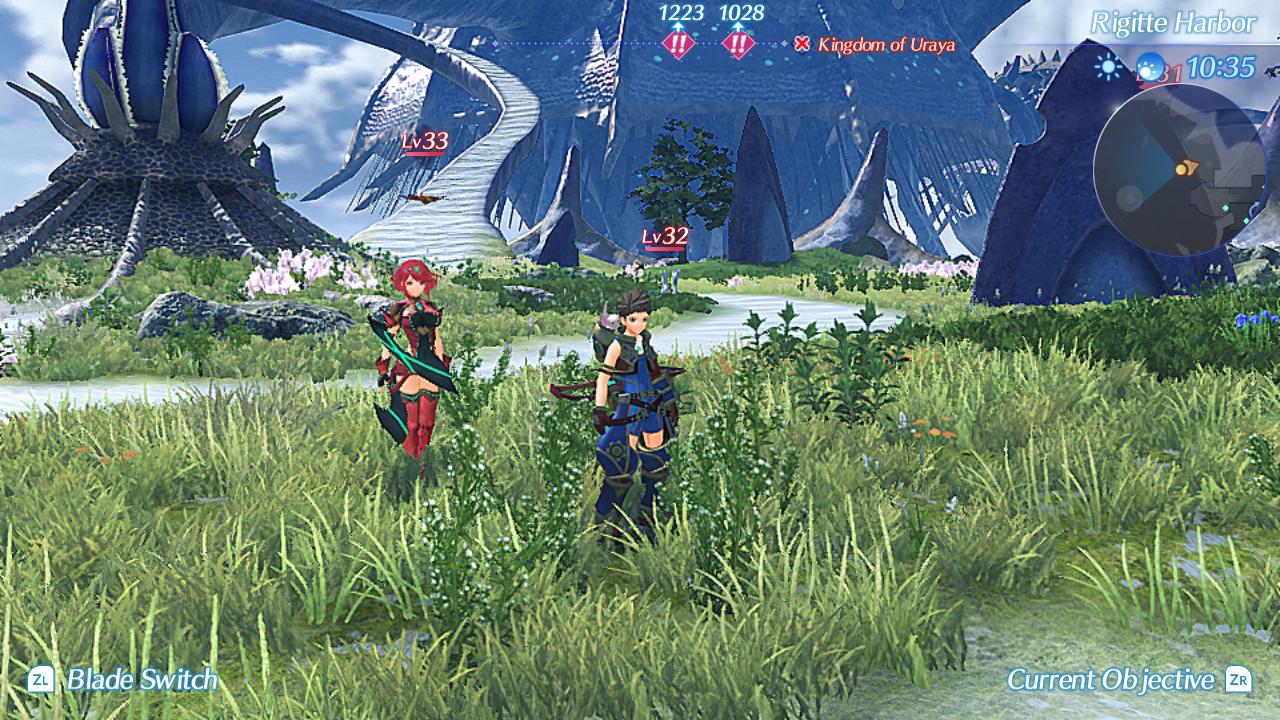 Right from the start, it’s clear that Xenoblade Chronicles 2 positions itself as a return to classical JRPG roots. The decision to revert to a more anime-focused art style was made pretty early in development, and had gone down better with the larger Japanese audience but may be jarring for those more used to the mech-focused entries. You play as a scavenger named Rex who inhabits the world of Alrest above the clouds. Rex soon discovers a ‘blade’ called Pyra, a living entity who acts like a weapon somewhat similar to summons in other RPGs except they’re always active and form an integral part of the fighting ability of the player.

Without wanting to spoil anything, Rex soon befriends a cast of travelling companions who accompany him through this quest. This all sounds like standard JRPG fare and it’s true. The cast of characters are a much greater focus this time, and in typical JRPG style they serve to keep the player interested in the often nonsensical story. That’s not to say the story is bad, but would be a whole lot less enjoyable if the game’s lovable characters weren’t there to keep players company. There are times when it feels like Monolith Soft are pandering a little too much to its male audience by giving its female characters questionably large assets and littering the plot with numerous sexual references. This reviewer isn’t prudish, but something to consider before playing the game around your family. It says a lot about Nintendo’s hands-off approach to Monolith Soft development that the game can be so explicit. Still, the plot is at times hilarious and there’s certainly never a dull moment.

A World to Explore

As mentioned, the game tries to strike a balance between providing an open world with a linear, character driven story and the game manages this well with a bias towards the latter. Players gradually travel to various towns on their journey which are surrounded by world areas which are best described as ‘expansive’ rather than open. They are dwarfed in openness by even the 12 year old Final Fantasy XII, but makes up for this by the sheer vertical height of the terrains which often results in areas being twice the size they initially appear to be.

Exploration of these areas is mostly driven by the side-quests encountered on your adventure, revealing locations to the player which the main quest may overlook. The battles follow the system pioneered by the aforementioned Final Fantasy title, though the ability to switch between blades and chain commands makes the battles often feel closer to the turn-based systems of old. There is a hidden, often dense depth to the battle system which will please those who deplore the relative lack of this in western RPGs. 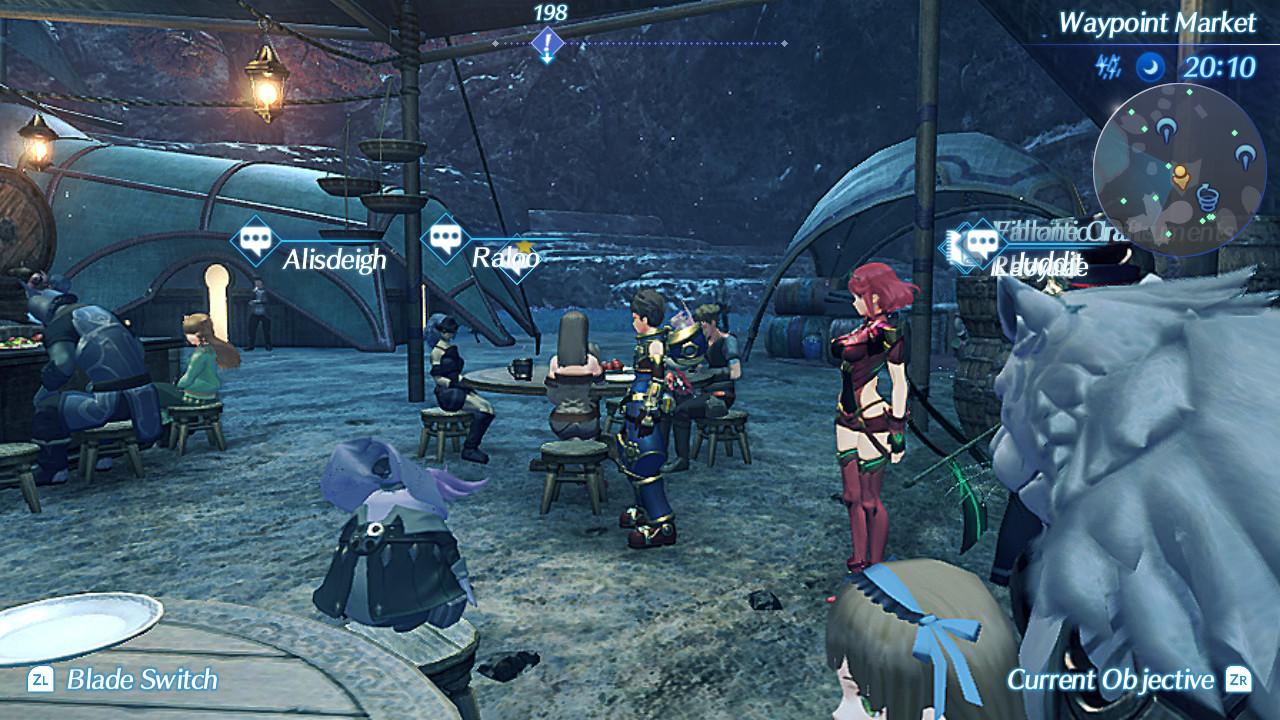 Feeling in the Dark

The game has two main flaws which affect the overall polish of this game, however. The game relies on a combination of its compass and in-game map to point players in the right direction. Unfortunately, you would often get more coherent directions from a drunk in the Bristol town centre on a Friday night. The compass and map both point to the literally location of where the player is supposed to head, but with little consideration for how the player is supposed to get there. This is where the vertical height of the game’s areas can leads to frustration as the route to your destination may even start in a different place to where the map is guiding. It may also be on a completely different elevation which the compass does indicate but is only really as useful as somebody vaguely pointing in a certain direction.
This isn’t helped by the fact that the game tries to convey 360 degrees of direction on a compass which only displays 90 degrees, making it difficult to tell if the destination is simply a little to the left or right of the player, or in the opposite direction. The distance is displayed on the compass however and may often be the only guide. 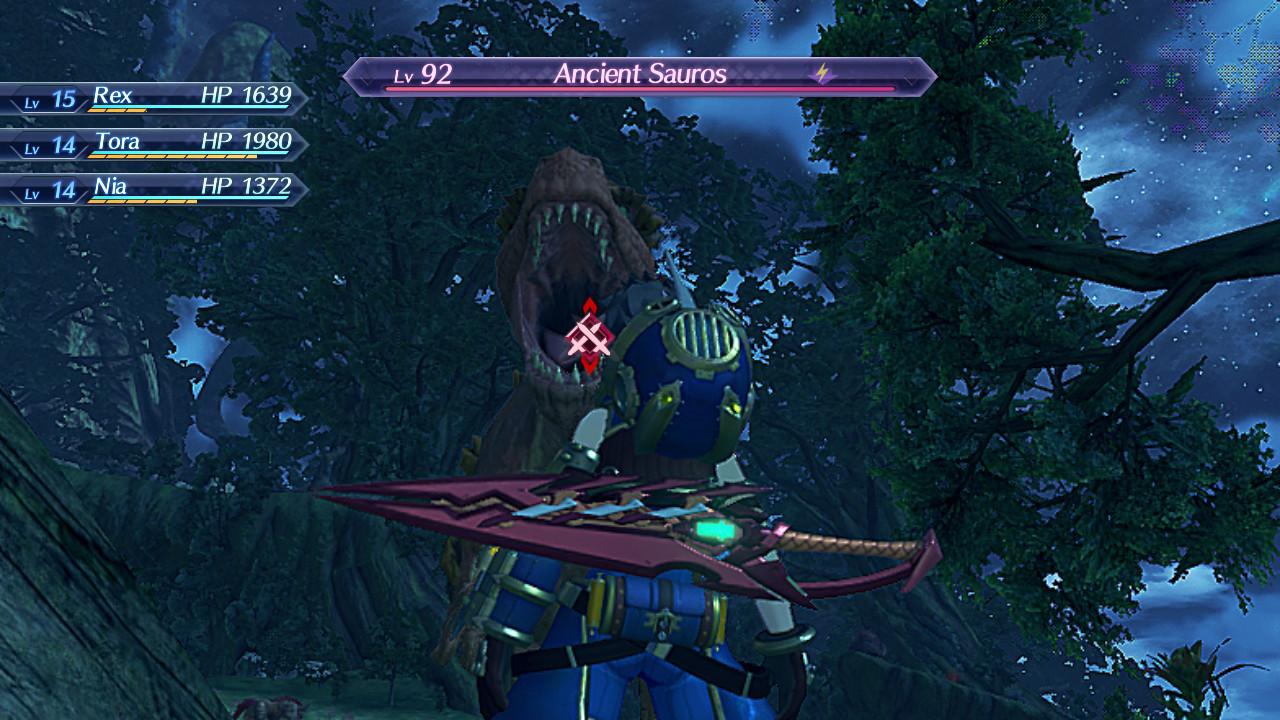 The game’s other main shortcoming is its performance, especially in portable mode. It was previously mentioned that the gage reuses most of the underlying technology of its immediate predecessor, Xenoblade Chronicles X. Unfortunately, the porting process from the Wii U would seem to have not been so smooth. The game targets 30fps and tends to hit that in most situations, yet drops below this are frequent and jarring. Worst of all, it isn’t always affected by what’s happening on-screen. Some instances of low framerates can be solved by simply saving your game and reloading, implying some streaming bugs that result in a gradual degradation of performance.

Portable mode comes out of this far worse, with perhaps the most aggressive dynamic resolution scaling seen in any game. In battles, the game can regularly drop to resolutions lower than even DOOM, with framerates still often being pretty awful. Things can look a bit like soup even on the small screen. It’s a shame that the short development cycle seems to have resulted in a neglect for performance and generally poor optimisation.

However, none of this should overshadow the fact that Xenoblade Chronicles 2 is a genuinely refreshing experience. Those who pine for the days of story-driven JRPGs with a strong cast of characters will feel right at home. Even without fully switching back to clunky turn-based play and without giving up the advancements in the genre we now take for granted It’s shortcomings must be tolerated as well its lack of technical polish, but anybody with a heart will find themselves sucked in.

PlayStation Plus: Free Games Of May 2016

Backlog guilt; do we need it?