The success of the Nintendo Switch as an indie platform is frankly no thanks to Nintendo, who make their eShop as difficult to explore as possible. If you’re not a brand new release, it’s difficult to get any kind of discoverability. Yet despite this, the Nintendo Switch is consistently the best selling platform for indie developers releasing their games on multiple platforms. Holy Potatoes! A Weapon Shop?! was originally released in 2015 for mobile devices before also making its way to Steam, and the Switch seemed like a natural next destination. 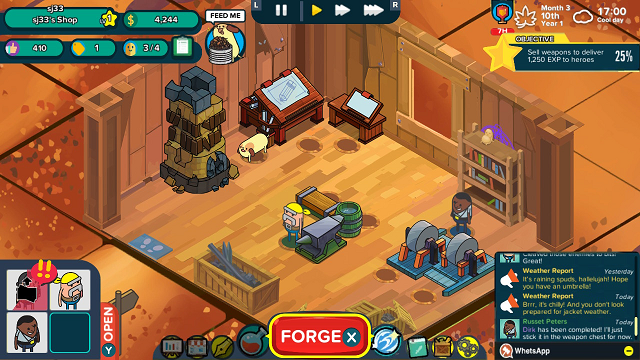 With a title that wouldn’t be out of place in a Prinny game, it’s pretty clear what the game entails. That said, Daylight Studios do a great job of putting their own slant on the concept. Did you ever notice how RPG worlds are littered with weapon shops? It might surprise many players to realise that the player surely isn’t their only customer! Japanese RPGs in particular tend to focus on the player being the one adventure trekking out to save the world. However, there must be a fair few wannabe heroes out there for a weapon shop to stay in business! That’s where Holy Potatoes! A Weapon Shop?! comes in. There’s no adventures for you here! Your job is to keep an eye on the local warriors and aid them in their quest by making the best weapons possible! 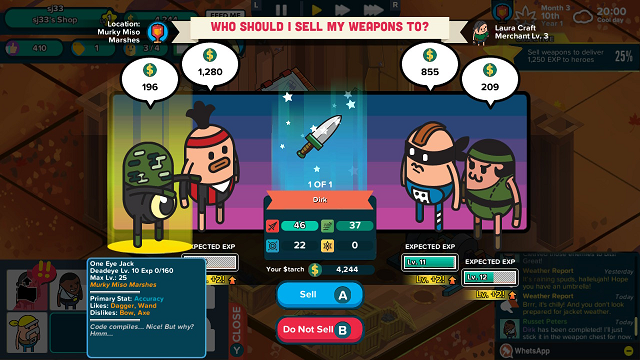 What are ‘ya buying?

Of course, it’s not as simple as putting together a sword, selling it to a local warrior and counting the pennies. Your success relies on their success. If they do a great job of taking down the local bandits or goblins with your wares, your reputation among the local heroes increases. This in term leads to more customers and therefore more (possible) money!

You’ll also want to sell your weapon to the warrior who will put your goods to best use, rather than any old fool who just happens to have the money. That requires making some big decisions – do you sell it to whoever if willing to pay them most dosh? Or for a tad less but to a warrior who knows how to use it? The latter might seem natural, but businesses have to keep the lights on – you have staff to pay, after all. Do you go for the short term option just to get some money quickly? Or think about the longer term and the extra revenue you may get later?

All Hands on Deck

Talking about staff, how you use them is critical to your success. Despite presumably being hired for their weapon-making skills, they also have to take on the extra roles required by the shop. Roles such as taking the weapons to town in order to find the best customers, purchasing materials with which to make said weapons, exploring new markets and even going out in search of materials in the wild. This requires intelligent management of available manpower as you dispatch people to obtain new materials while weapons are being sold. No money is made while nobody is working, so carefully managing staff roles so they are all completed in time for the next weapon to be made is critical for running a successful business.

This also affects how these roles are performed – do you buy lots of materials in one go in order to save time later, or just buy the materials you need and risk needing to take another trip later? If manpower is a bit tight, players may also bring in a freelance worker with specialised skills who give you better results in specific areas than your own staff, but they aren’t cheap! You may wish to persist with getting your own staff’s skills up to scratch, yet the immediate concerns about running a successful business might rear their ugly head. 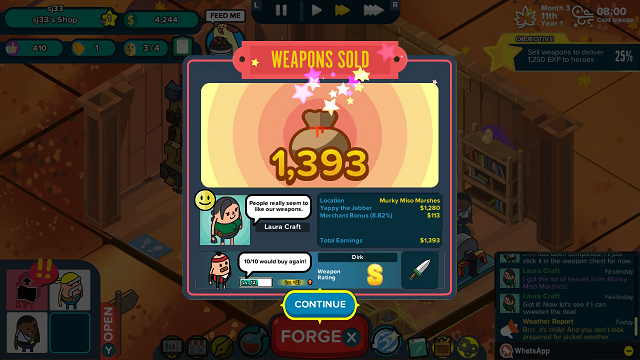 In short, Holy Potatoes! A Weapon Shop?! is a rather well established genre albeit with a somewhat cute spin. Console players may be less exposed to this type of game however, so there is huge potential for this game to tap into a new market. There are a few elements which betray its roots as a mobile game however, mostly minor things relating to interacting with the interface using a controller. Bizarre things such as having to press up on the world map to move the cursor to the right take a while to get used to.

Speaking of the world map, players undertake different tasks such as selling weapons, buying new materials etc. from an interface while takes them to a world map. This world map is self-contained to each task. If players want to send a worker to sell weapons and somebody else to go buy some goods, they must back out right to the initial menu, select that task just to them be taken back to an identical map. This could do with some consolidation to save player time when the heat is on. None of these issues hinder the game in the slightest, but a little bit of work to fix these issues would have gone a long way to smooth out the experience.

Overall, Holy Potatoes! A Weapon Shop?! is a charming take on the genre. The implementation is easy to understand even for genre novices, and it won’t be long before you find yourself determined to play for ‘just 5 more minutes’. It won’t convert anybody who find the idea of shop resource management to be a chore, but this is a decent entry point for the curious

Defining a console: Nintendo 64 Must Plays