19 years ago, developer Insomniac Games released Spyro the Dragon on the Playstation. 19 years of innovation, but does this game still hold up today? The short answer is yes it does. The slightly longer answer is written below.

The original Spyro the Dragon on the Original PlayStation

Who remembers the original PlayStation, the revolutionary gaming console from Sony which gave us many classics that are still good to this very day. Among the very top of those is the Original Spyro the Dragon. Released in Europe and the US in 1998 (in Japan a year later). Many people see it as Sony’s counterpart of the Super Mario Games and Super Mario 64 in particular. and even though it does show many similarities, it is a very unique game worthy of its own merit.

After only a very brief cutscene you can start to play immediately. An art many games nowadays have lost, though that is a completely different topic all together. Looking at the meadow you start in by todays standards is relatively devoid of details. There is enough to see and enemies to chase and burn, but back in those days there simply wasn’t enough memory and processing power for whirling leaves. But don’t get turned off by the rather simple graphics, just a few moments of running around will show you that worlds are lively, colorful and very enjoyable even today.

The fact I enjoyed the Spyro games a lot when they were the best PlayStation had to offer does factor into my enjoyment of the game today. But don’t think nostalgia is fully clouding my judgement. there are many games I enjoyed so much back in the day which just didn’t age that well. Spyro the Dragon is definitely not among those.

The basic concept behind the gameplay is pretty simple. Save the dragons and get collect gems. no lengthy tutorials needed, nor confusing plot to develop and it does the game justice. From the moment you gain control you know what to do and how to do it. Even the youngest can enjoy this game an who knows, maybe even your girlfriend might enjoy this. After some hopping around in the first ‘hubworld’ you find a few portals that’ll transport you to the different places around the world of Spyro, serving as levels to complete.

Every hubworld has its own interesting bossfight and flying level. Especially the flying levels are interesting. They are pretty easy to beat, but if you want all the gems, you have to complete all challenges in one go, which might take a few tries. Challenge without frustration, just the way I like it. Overall the game isn’t too hard. Some of the later level might test your skills a bit, but those are not needed to complete the game. Still, the lack of difficulty is never taking away any of the enjoyment of the game. 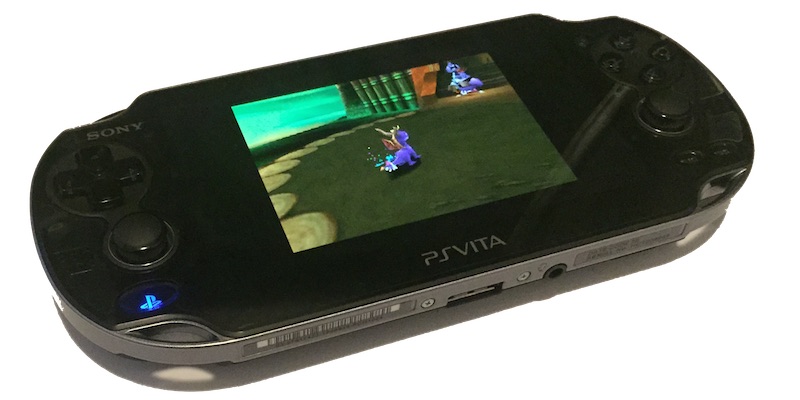 Buying this game today is still an options thanks to the PSNStore. I even highly recommend it. Buying it allows you to download it to your PSP, PSVita and PS3. (Gotha love Crossbuy!) but even though you are able to play em on all systems, I highly recommend playing it on the Vita. Main reason for this is the controls. Even though the original (and the PS3) version support the analog sticks (most early PS1 titles didn’t), the second control stick remained unused. You rotate the camera using the R2 and L2 buttons. This isn’t at all bad and works just fine, I still prefer mapping the R2 and L2 to the right analogstick and rotating the camera that way. Why this isn’t an option on the PS3 completely eludes me.

Overall This game is not only one of the timeless classics on the original PlayStation, but still an enjoyable trip even today. I cannot recommend this game enough to anybody but the most hardcore thrill seekers. Playable on almost all Playstation devices and for a price close to free this is a game you should not pass up on.