With the game’s release in the rear view mirror and a major game patch on the way, the focus is on Yooka-Laylee for Nintendo Switch! Sadly, not much is yet known about the release window for the long awaited Nintendo Switch release. Developer Playtonic Games however does confirm that with their first big patch near completion, they will be able to focus putting the lizard and bat, between a pair of Joycon!

But first, a big patch!

But before the full focus will be on Yooka-Laylee for Nintendo Switch, Playtonic aims to finish and release the first significant patch. This patch will address many of the complaint by both fans and critics of the game. If you read our review of Yooka-Laylee, you found that we think many of these issues did little to ruin the game. However, there are some notable things we still love to see improved and we highly commend the guys and gals at Playtonic for bringing in these changes.

Many fans believe Yooka-Laylee should be played on a Nintendo console. The nostalgia about Banjo-Kazooie and Conker’s Bad Fur Day simply draws them to a Nintendo console for games like this. Even though there is absolutely nothing wrong with playing Yooka-Laylee on Playstation or Xbox, we do see their point! 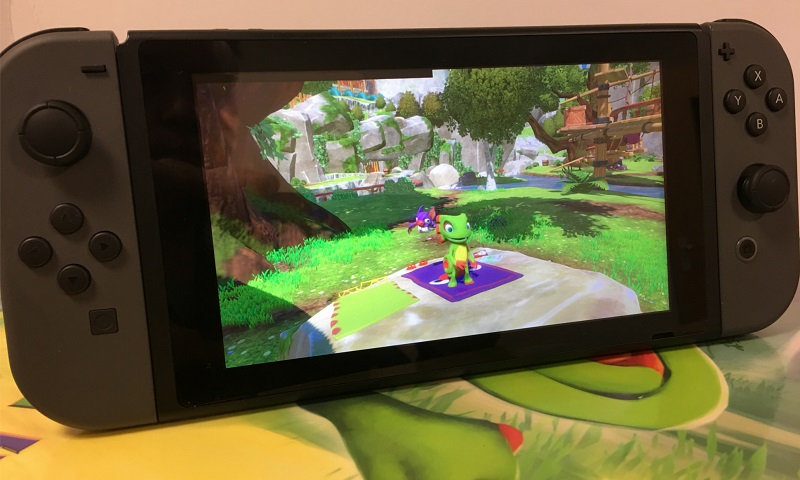 The first significant patch, lovingly called “The Yooka-Laylee Spit ‘n’ Polish Update” will include many fixes. Both big and very impactful as well as small tweaks. Here are some of our favourites. (Full list will be included at the bottom of the article)

New camera option and improvement to the old.
One of the biggest complains on Yooka-Laylee is the bad camera. Though we found it far from perfect, it was not the bother other found it. That being said; it’s great to see some improvements and options to what many consider Yooka-Laylee’s biggest flaw.

Improvement to ‘gibberish’ voices
Another big complaint by many. The ‘annoying’ voices of the characters. We found them endearing, but we understand the annoyance to others. The update will include a volume option for the speech, as well as an option for ‘shorter’ gibberish and you’ll be able to speed through the text by holding a button! (yay, speedruns)

Improvement to Rampo Bossfight
The Rampo bossfight was one of the only parts that we found really hard to endure. The camera is off, the fight terrible and the conditions unfair. On top of that, it’s the very first bossfight in the game! Great to see Playtonic address this issue!

… and the best thing of all? The full patch will be included in Yooka-Laylee for Nintendo Switch!!

Does Twilight Princess HD hold up?